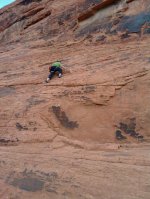 This was my first outdoor climb in which I actually climbed! I am not listing this as a hike because the approach was not really a full enough distance for me to take hiking credit. I will say that my pack was the heaviest it has been now that I have added a 10mm/60m rope to the kit.  That is 8.7 pounds of rope to add to my pack which is loaded with water and my harness, carbabiners, shoes, helmet, little bit of food, first aid kit etc. Not real heavy but more than I usually carry and does burn more cals. 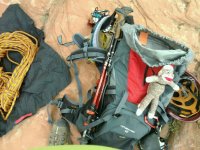 The first rout I tried was rated 5.5 in the wall climbing rating system. That is the easiest of the ratings. I tied my double figure 8 follow through knot with Kristen’s help and off I went with her belaying. It was not as hard as the gym walls but much higher. Quite fun really! I felt a real sense of accomplishment upon arriving at the top anchor. I found that there is so much more ability to find things to grab or ways to use your feet effectively on the sandstone. Much better than the smooth walls of the gym. I also realized that many of the things I had done in the gym translated in spades on the wall. It was the first run and it was one I shall not forget.

SWEETS TO THE SWEETS 5.7 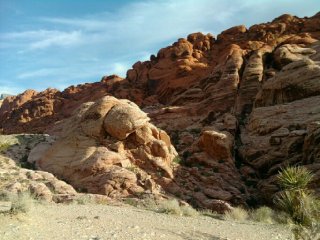 For the next while I went up and down the rock watching and learning and taking Pictures. Then I finally gave a harder wall a try. Soon, as I was starting the ascent, people I did not know well were arriving and for some reason I simply got self conscious.  The rope I was on was going to be pulled in about 20 minutes and I was moving slow so I came down off that wall. 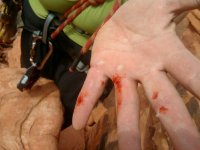 This was the next attempt and is located on the lower tier of the wall.  I was ready to do this one and feeling confident. Up I went and as I was really getting started I slipped. Yes. Slipped. I fell a few feet landing in a rather icky way on a protruding rock that then discovered some of the undiscovered territory in the name of the route! It hurt like nobody’s business and just kept hurting, Bad enough to make me laugh instead of cry.

Posted on November 22, 2010, in Hiking, Hiking in Las Vegas. Bookmark the permalink. Leave a comment.

Health, fitness & sports information for women over 40, overweight or out-of-shape.