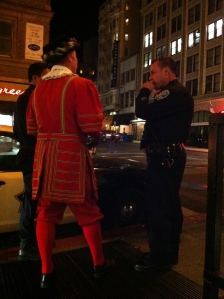 I recently attended a conference with the Nevada Justice Association in San Francisco.  One of the events you could choose to participate in was a 5k.  I signed up and one of my big motivators was was that any 5k in San Francisco would have to have some big dang hills. That would be a good progress test for me leading up to the Everest Base Camp Trek in March. The race was pretty informal and we got a turn by turn hand out to keep us on the trail. So off everyone went….except me. I was apparently the only walker. But that was ok. It was a good morning and the fog was with us making it a very different 5k than I usually do.

I felt good and quickly set up my GPS to track the route. I always like to do that. As I was moving along from Union Square to the Embarcadero, I enjoyed the sights

Artwork on the Mission

and sounds of a city waking up.  Traffic was light and there was no wind. So I snapped some pics as I went along and really was enjoying the air, moving quickly, feeling strong.  So, there couldn’t be a better day. Soon I was up on the water in front of the Ferry building and looking out into the fog that socked in the Bay Bridge. On up the road I trudged, iPod accompanying each of my steps. I knew that a turn was coming up so I was paying attention to the street signs. I didn’t want to be late for breakfast, after all. But after passing the cable car turn around on Powell, I thought for sure that something had gone awry. Rather than

cut up from there, though, I just kept on my path.  I began thinking about the fact that I had not yet had a single hill and was disappointed. That disappointment would not endure, however. A quick look at the GPS revealed that I, indeed, had gone astray and now I needed to map a rout back. Time was a wasting and not only was breakfast in peril, but being to the seminar on time was also iffy.  By now I was on Bay Street, having turned left off the Embarcadero. My destination was not really that far. But to get there would take a trip up Hyde. To the top of Lombard Street. That is the squiggly be-flowered street so steep and famous on the post cards. That was wha an only be described as a “butt buster”. And the real weird thing about it is that I LOVED the challenge and the push. UP, UP, UP. STEEP, STEEP, STEEP! I went on past Lombard and was at the top of Nob Hill at the “Mark”. I remembered having sung there while attending Simpson College back in the

early 80’s. Itwas a warm feeling of deja vu…..until I saw that what goes up, must come down and now I had to go down the steepness of one of San Francisco’s most famous of its seven hills. No knee braces and time was a ticking!  I took another look at the GPS and flew down that hill into the fog below, arriving back at the Marriott, Union Square with 10 minutes to spare. I grabbed an orange juice and headed to my room to clean up and rush back down for the Nevada Supreme Court Justice’s panel. In the end, my deviation from the route aded 1.4 miles on to the 5k, logging in 4.6 instead of 3.2 miles. It also gave me the hill I so wanted to have in this 5k. An added bonus was that the knees withstood it with little residual pain, and even that dissipated pretty quickly.

Lookin a little puffy! Must be all the moisture re-hydrating my pores!