As many have heard and seen there was an awful tragedy at the beginning of the 2014 Everest climbing season. Over a dozen Sherpa were killed and several badly wounded when a massive chunk of ice broke away and devastated the area between camps 1 and 2. My blog today is not intended to go over all of the activates and conditions at Everest since the tragedy, though it is very much worth reading about. Alan Arnette has a great series of blogs and updates and links to all the information that will help you inform yourself of those things. My blog is more general. It is about the Sherpa and the way their culture infectiously changes the life of westerners who have a relationship with a Sherpa.

In 2012 I went on my Everest Base Camp Trek with Mountain Madness. You can read all about it in the archives here on this blog. Mane Sherpa was one of our team’s Sherpa and I spent a lot of time with him.

Mane is the Sherpa on the left

He carried my pack, watched out for every step of my trek and even dove to catch my fall when I tripped over a rock. From the moment I met him at the Lukla airport, his smile was infectious! The smallest in stature of our Sherpa team, he did not lack strength and heart. As we walked along the trail he would  tell me “Stop Miss. Drink.” and he would share a snack and a drink and we would look around and smile. He didn’t speak much English back then and was not able to chat with me. But he still communicated what he needed to and always made me feel comfortable.

On an acclimatization hike, mane leads me down to the Tea House in Namche Bazaar

Long days on the trail he kept my slow pace.

He never complained even though, at my pace, he would miss tea with his Sherpa coworkers and still have to do all his in camp work after we arrived.

Mane was working in the trekking industry in order to get enough money for a down payment on electrical power being installed in his house.

In addition to Mane, there were several other Sherpa and Sherpa on our team.  All of them working to make their lives in Nepal better. Not any different than people around the world who just want to make life better for their families.  One Sherpa was there because he could no longer farm because of the loss of his arm. He herded the yaks that carried our duffel bags and our kitchen along the way. An Ram Kaji our kitchen leader.

He feared that due to age he might not have a job for the next season and hoped we left good reviews for him.  He was not that old and it seemed he might be over reacting. But he wasn’t.

Before I ever went to Everest Base Camp, I followed the happenings on Everest. Several years prior, there was a Sherpa who was becoming famous and even one of the first to have his own company. His name was Babu. Working as a climbing Sherpa, he was about to set the then record for summits by a Sherpa. But taking a picture for a western climber, he backed up to get the shot and fell into a crevasse and was killed.

This memorial is prominent in an area of memorials for all people who have died on the mountain.

You reach this part of the trek after a grueling uphill from the river below. Mane was quite helpful the whole trip up. We were there alone and visited all the memorials. This one made me cry as I remembered the day Babu died and how that very day, NASCAR champion Dale Earnhardt had also died, bringing our nation to a halt. Yet this Sherpa man who had summited Everest 10 times by the time he was 36, had made the fastest ascent of Everest in 16 hours and 56 minutes and who had also spent 21 hours ON THE SUMMIT with out any supplemental oxygen was a small article in Outside magazine.  After My ahem… departure from Everest, I was in Hospital in Kathmandu and my nurse was a niece of Babu. She proudly told the story of her uncle and how he had helped her whole family with the earnings he attained from the notoriety of his achievements.  That is the purpose of climbing for most Sherpa. They cannot make anywhere near the kind of money climbing Sherpa do in any other job in Nepal. They not only assist their immediate family, but all of their family and much of their village in many cases.

When the tragedy of 2014 occurred, I got several contacts asking me if Mane was ok. There are different kinds of Sherpa jobs. A trekking Sherpa goes from Lukla to Everest, in the case of jobs related to Everest. They could be Sherpa or porters. They may be sherpa by job title or Sherpa by ethnicity. Porters are the “Truck Drivers” of the trail, hauling loads of unimaginable weight and proportion. Instead of truck and trailer, they rely on baskets and legs. their tires often consist of flip flops! 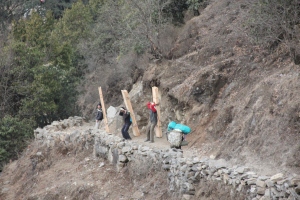 Porters carry heavy loads of lumber for building houses in the Khumbu.

It takes brute strength and it means carrying loads and cooking and helping westerners who want their dreams to come true. It means long months away from family and friends, sleeping outside in cold conditions. It means often putting up with condescending elitists who simply do not understand that these men work hard and would do nearly anything for them despite the treatment they get from such clients. 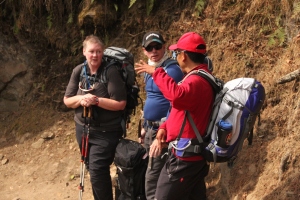 Dawa, the Big Boss Sherpa of our team

On the second day of our trek I had been plugging along. Kaji was the Sherpa with me at the time. He helped me learn the rest step properly. He encouraged me along the way. He was a monk and also the only Sherpa with us who had traveled out of the country. He was often on his cell phone. Later I learned that there was a lot of communication between my Sherpa and the front of the pack. All the Sherpa were aware of my progress’s and each one was encouraging. Not a malicious bone in their bodies,. This job was not just a begrudging sentence to accompany us. They took very seriously the care and condition of each trekker in the group 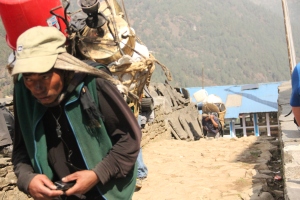 Kitchen porter carrying loads to our next stop

The native mountain workers are the foundation of trekking and climbing in this region. Without them, most climbers on Everest would not be able to get up the south side of the mountain. Even in trekking, people like me ae better able to trek to EBC because much of what we need is taken care of by the Sherpa and Sherpini. Some of the Sherpa earn enough climbing to operate a tea house along the trek in.

What ever the objective, the western trekker climber is not simply a a means to an end. For the most part, they are dedicated to doing their job well and they develop a relationship with you if you spend any amount of time with them.

The whole group at Base Camp

I am proud to know some of the Sherpa of the Khumbu. They changed who I am in those halcyon days in the Himalaya.