Stand Up Paddle Board Workout!

Today was a fun day trying something I have not done before. Garage Gym 702 workout was at Lake Las Vegas where we did SUP or Stand-Up Paddle Boarding with SUPLV I have been wanting to do it for a long time. I have read a lot about them and know that because I am no small girl, I would need a big flat one to do my best. Especially having never done it. I saw they had on and tried to claim it. But when the instructor got to me they said no, you need a smaller one and put me on a nice sports car looking one where I thought I was more of a 7o’s era station wagon boarder. But they are the experts so I do what I am told.

It was a wobbly proposition and as I was attempting to stand it was very hard to keep the board stable. I wobbled and wobbled and paddled and flailed until finally I was sailing through the air and into the briny deep. Well, the lake at least. As I came up from the depths the same person who told me I needed the small board had a wonderful and original idea….how about trying the bigger flatter board!!!! Thangs that make ya go huh.

Well up I went and this time I could actually keep up and the board moved through the water with ease. I had some five-toes footwear on and my Go-pro in my packet. Luckily it did not fall out when I took the plunge! I paddled confidently round the harbor, choosing not to go out into the chop as I knew the prospects of remounting the board in deeper water were zilch. It was a great feeling of all sorts of micro movement of my stabilizing muscles. Really working those out. My calf muscles too! Despite tons of walking and working out, and though my quads and arms and core were not feeling overly worked out, my calf muscles began to bur as if someone was lighting them with a blow torch.

After a good hard workout around the lagoon, I paddled in to the beach and then took an= relaxing swim. It was a fun day and after we were all safe and sound on land, we headed to The Omelet House for a great time of breakfast and craic! (Craic is Irish for fun talk and banter). There were about 12 of us and it was really an enjoyable time. 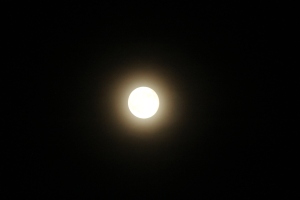 As the day wore on and I was doing stuff around The Doll House, I began to feel more and more of my core and shoulders reminding me of my morning of fun. By bedtime I knew that the morning must have been a lot more fun than I first realized. I took a walk in the light of the Super Moon and stretched things out a bit before bedtime.  It was a great day in the Vegas Valley. Low 100’s and less humid than the previouse monsoooooony week. I slept like a log and am ready to start my 75 squats for the day and see what else I can do to stay out of trouble.