On the Road to Lake Las Vegas

No time like the present to go ahead and see if the leg can keep up and do a 5k. So out to Lake Las Vegas we went to do a cool evening headlamp walk Calico Racing put on. It is the first 5k since I messed up the cartilage in my knee on June 3, 2015. Since then I had surgery and learned that at some point soon I will need to have the entire knee replaced. I was thinking in a year, but since have modified that to April 2016. There are a few methods to my madness. For one, my insurance year ends June 30, so with the surgery I just had and the knee replacement in one year, it cuts in half my out of pocket expenses for the replacement. That is because I hit my maximum out of pocket in a plan year. Another is it gives me less time to lose the weight I want and so more motivation to get on it now.  I think the goal setting for the weight loss is enhanced by the shorter goal period. 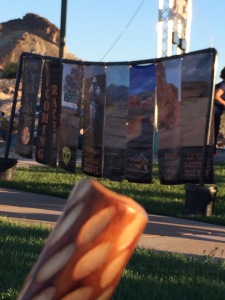 So we got to the park for the walk. It was nearing sundown and a pleasent atmoshphere ran through the crowd. I noticed a woman with a race bib sitting in a camp chair and it occured to me that she was very large. Moreso than me. I felt bad that I thought about her that way. I put the information in the far corner of my mind and got in the back of the crowd to walk. And off we went.

The course was a tiny down hill and then up the entire first half. I had my walking stick and the knee felt just big and numb as it has since surgery. I reached up to test my light for when the sun finally dropped below the horizon behind the Vegas strip. Nothing. I had fresh batteries but had blown the bulb. I continued on anyway, not sure if I would turn around or not. Worried that I was looking for any excuse to quit. 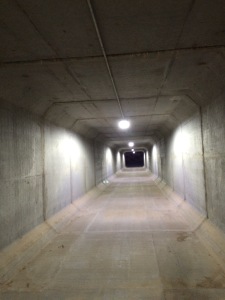 Tunnel under the road. Only Uphill From Here.

As I topped a rather steep little section it was clear my fitness level was immeasurable. I looked back to see if anyone was behind me and saw nothing. I wondered about the woman in the chair.

My fitness app was working away and my walking stick from Hearst Castle was helping me along as I put one foot in front of the other. The sun was sinking and twighlight was upon us. The lights of the strip were beginning to come on off in the distance. 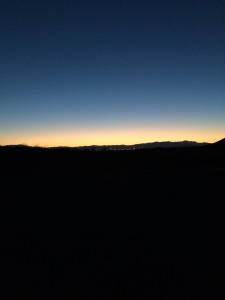 20 miles from the Vegas Strip

Soon it was completely dark and I had barely hoofed off a mile before the front runners had doubled back and were on their way in, headlamps bouncing like bright white balls in the darkness. I started to worry about the darkness. Right then, a group of three or four people approached lights and all. Just as we met they were shouting out words of encouragement and the woman closest to me grabbed my arm and put a light in it. I said I would find her and return it at the finish. She looked concerned and just said “keep it” as she disappeared into the darkness.

Moon in a Vegas Sky.

As I thought about her being my trail angel I wondered again about the woman in the chair.

About that time I could see a stationary becon of light ahead and knew it was the turn around station. As I arrived and took a glass of water, guzzling it down, I felt the going would be easier downhill. As I hugged the tight edge of the pavement so the runners from the longer 10k route could pass, it became clear the light I had recieved was a godsend. The edge was uneven and with the knee acting up I am sure I would have fallen at some point. There are good people in this world. She was good to give me that light. Whoever she is, wherever she is, thank you!

I moved much slower down hill, finding that my knee didn’t like it much. I passed the two mile mark and got just back to the top of that steep spot and saw the lady from the chair. Her walking partner had just sat the chair down and she sat down in it huffing and puffing from the work of getting up the steep section. I uttered some encouraging words and told her I hoped to see her at the next 5k. And I meant it!

Back to the tunnel and up the final stretch. My right calf and left hammie began to cramp. I fought off the cramps and plodded on, crossing the finish line with the worst time I had ever had. 25 minute miles.

But it was the start of getting back in shape. I didn’t bail, I didn’t quit, I didn’t give up. Just before I left, I ran into one of the people I had seen at the beginning with the lady in the chair. This was her third 5k in as many months. The first was well over 3 hours with the second being just over three hours. And she has another next month. It was humbling to hear about her dedication. We can all do this. We just have to want it more than we want our current situations.