It is that time of year again where Sonya Vasilieff comes down to Las Vegas and we try to accomplish some adventures.

Ready to load Ace the Adventure Wagon and hit the road to Utah! 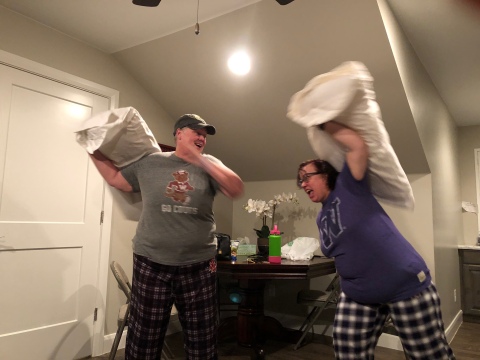 A little Apple Cup action early in the season,

This year our goal — set months ago — was to do the most difficult trail in Zion National Park — Observation Point. Many people think Angel’s Landing it the hardest — it is the most exposed and daring hike, but Mt. Baldy sores above it and features close to 2200 feet in elevation gain in four miles. It tops out at around 6500 feet total. Let that sink in. (Sonya comes from the Seattle area and lives at about 500 feet elevation, so that is a jump for her.) We added in Eric Besserud and met up at our vacation rental in Hurricane, Utah, so that we could get an early start and be in the park before there was no more parking. We enjoyed a wonderful meal at The Stage Coach Grill in La Verkin  before settling in to a nights rest.

When was the last time YOU slept in a bunkbead?

Upon arrival at the park, we quickly got on the bus to the trail head. Stop number seven on the Zion Shuttle. Just as we approached the stop the driver advised us all to look up at the top of observation point. We did. My head snapped around and I looked at Sonya, who had also just snapped her head around to look at me. She exclaimed: “Oh, we aren’t doing that!” Though I thought the very same thing, I had to push back or I wouldn’t make it a step up that trail, let alone have a chance at the top. 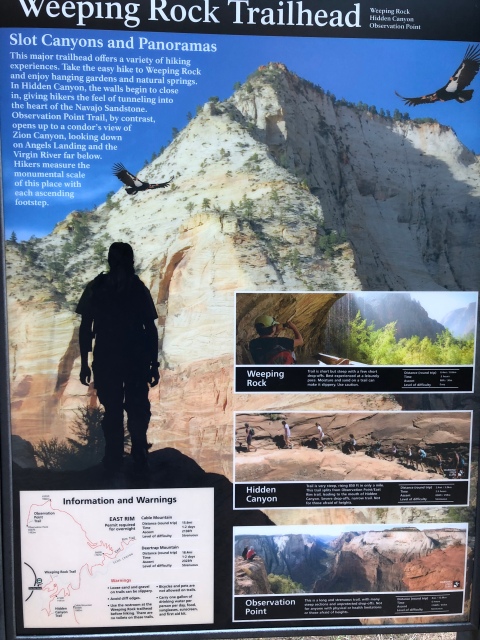 We got off the shuttle, donned our packs, and started. Sonya led the way and Eric hung back with me….the slow one. The trail wasted no time in showing the steepness we were to face the entire way. The trail shares a start with the Weeping Rock trailhead, just go to the right of the interpretive signs instead of left and you will be headed up Observation Point Trail. You begin at 4,394 ft of elevation and a 10% grade. (The maximum permissible grade on most highways in 6%.) I was thinking about Sonya, starting this hike 3,894 feet above the altitude she lives at! I topped out at 5,763 feet for an elevation gain of 1,369 feet in under two miles up. Parts of the trail were 33% grade.  At least that is what the profiles I have been able to find reveal. The last time I saw Sonya until she crossed the finish line! What an accomplishment!

Spectacular scenery every step of the way. 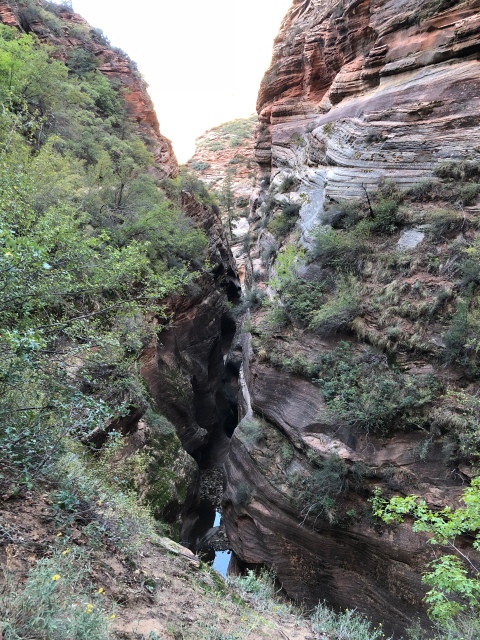 I passed through so many different beautiful areas — canyons, slots, canopy cover — but I was working overtime and just under two miles I hit a big wall. I bonked. Sonya had left us long ago. I figured she overcame her original statement and just accessed something inside to hunker down and do the work. I told Eric I needed a break and he went on up to catch Sonya. He caught her just below the top. It was nice to have him pushing me to keep going, and I made great progress over my previous, post knee replacement hikes. But only 50 pounds down and not enough training left me with no more gas in the tank and the need to evaluate whether to continue up after a rest or to turn back. 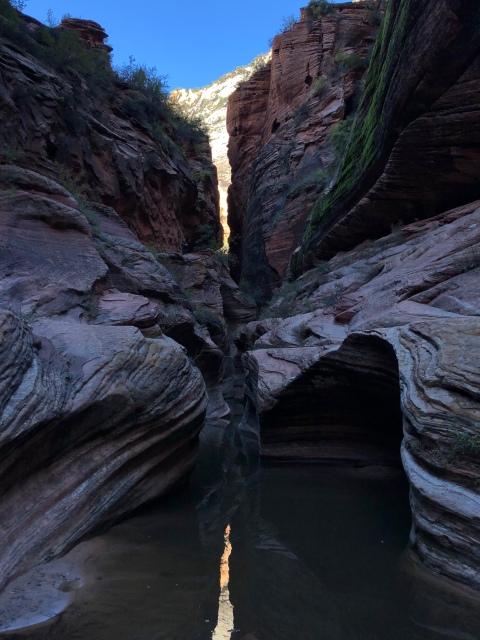 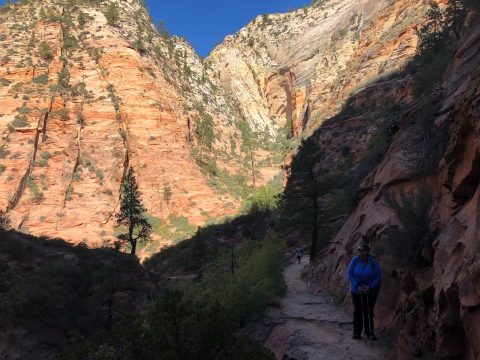 The great Ed Viesturs talked about calculated risks in a presentation I heard him give once. I had to calculate the risk of expending energy to continue up and determine whether I would have enough left to get back down. At this level of steepness getting down was not going to be an easy trot down the trail. I also had to factor in time. In the end, It was clear, I had to go down. Even with that decision, I wasn’t sure that I would get down before the others got to the top, turned down and caught me on the decent. 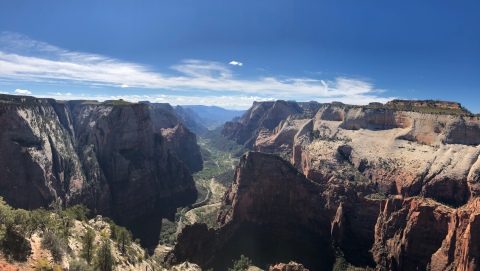 Looking down on Angel’s Landing. Sonya’s view from the top! 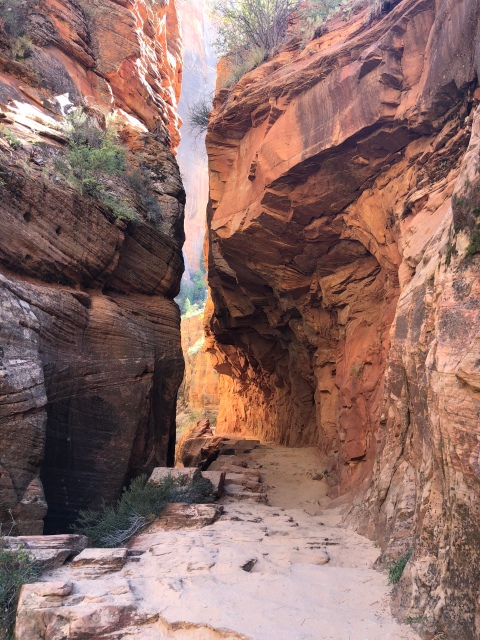 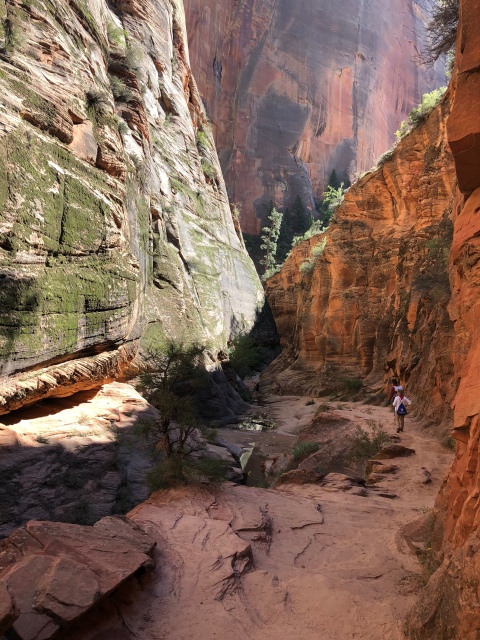 So I worked my way back down, at times with minute steps and a fear of slipping on the sandy gravel that often times coated the smooth, chiseled rock path. Hiking poles were a saving grace. Other than stepping off trail to allow others passage, I did not take breaks going down. I just kept working. All the while curious about Sonya and Eric. I really wanted Sonya to hit the top. There was no way for me to know if she did.  She has been working so hard and expanding her fitness and I thought to top Mt. Baldy would prove to her how strong she really is. 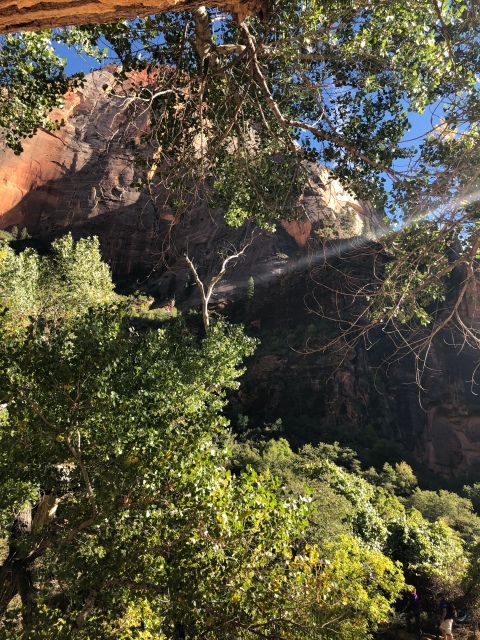 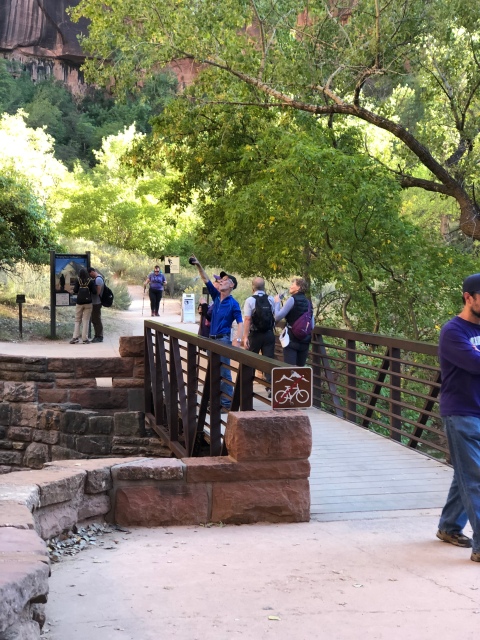 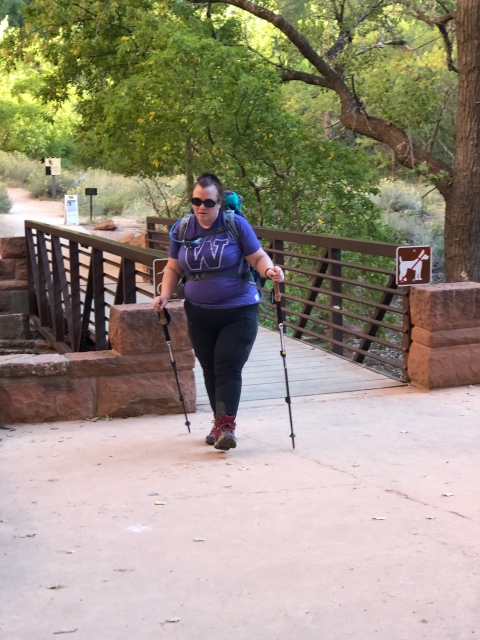 Going down it was very clear just how steep it was. And no surprise why my FitBit reported that I had been in my peak cardiac zone for over two hours! It also stated that I had burned 5,066 calories, been in active minutes for 214 minutes and had taken 16,487 steps. All in all, information to establish a benchmark going forward. 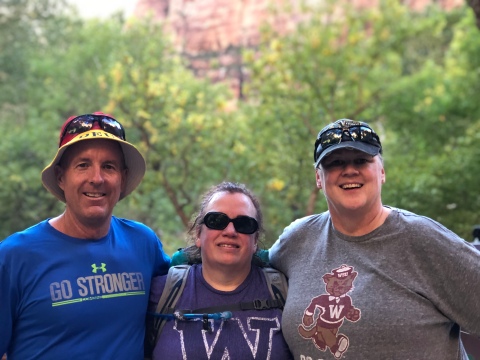 Return of the Victor! What a great day with two of my besties!

Until next year, we have done it again!

Health, fitness & sports information for women over 40, overweight or out-of-shape.