So, as I marshal on with less communication…..and fewer showers, I increasingly get fatigued. That is OK, though, cuz it is what I signed up for. I am far slower than the group. Three went up Kala Pathar on their own  and got great views. I got rest and tried to eat. But it was cold in the tea house so I went to bed right after dinner. No liar’s dice! So we got up and headed out to Base Camp. Nothing is a slight uphill to the finish. This hike was up and down and up and down again. Across the wonderful glacial push of the Kuhmbu.  It is so quiet and I cannot even hear the foot steps of my daily Sherpa, Mani. He smiles all the time and speaks only little English. His goal with his money from trekking season is to buy lumber to cut for a house and to study more English. People here want so badly to speak English because it means better trekking jobs etc. I have met many people on the trail that I have previously met at the tea houses. They pass me and sometimes lap me going back from Base Camp.

One of the big up hills today culminated in a high flat area filled with monuments to fallen climbers. The first at the top of the pass was Babu Chiri Sherpa. He was the first Sherpa to get outside of Nepal sponsorship. he is the hero of the Sherpa people. I remember the very day he died. It was the same day as Dale Earnhardt. I had been following Babu Sherpa and then he stepped back to take a photo and fell into a crevasse. It was mesmerizing when I saw the plaque.

Just down from there was the large monument to Scott Fischer. He is the founder of Mountain Madness and was one of the victims of the 1996 storm from which books like INTO THIN AIR and THE CLIMB originate. It was an emotional moment and part of the dream of being here for me.

But this day was the day that would never end.  I keep pushing and try not to stop too much but Mani tells me stop and I do. I drink and eat a snack and move on. A snack is a Shock Block or a bite of protein bar. Just no appetite. I got some views of Everest and Mani and others took pictures for me. Onward. I could see base camp. A long sprawling thing that seemed to never end….and we would be camped in North Face tents at the far end.

I was just getting beat. Dragging myself one foot in front of the other. I finally got to the spot. The clearing where everyone gets the Money Shot. EVEREST BASE CAMP. I was there. I had made it. All the years of wondering what it was like and dreaming and reading all at once…I was there. The jagged ice falls behind me. Russell Brice‘s huge set up complete with Dome Disco tent! I was there.

After a few minutes of relishing the moment, we moved on. Spent as I was, I had a long way to go to get to my groups camp. We passed camp after camp of busy porters and Sherpas working away for their particular teams. Jagged Planet,  RMI, Mountain Hardwear….then there was this place all these Sherpas kept passing me to get to with pick axes and shovels. They were gathered at one mesa looking place and were swinging away setting up this year’s Heli-Pad. They have to do a new one each year because of the movement of the glacier. Onward. Then it hit. Just like day 2 when I was sick and retching.  I was not doing well and we still had a way to go. Pretty soon, here came Kadji. Another of the Mountain Madness Sherpas that is on our team. He and Mani walked with me and helped me where the ice or slush made climbing difficult. I was absolutely out of gas. No fumes. Nothing. But tonight  would sleep on the glacier, hear the three big avalanches, listen to the pop and crack of the ice underneath me.

I literally fell into a heap in the dining tent. Blood Ox low, heart rate high for me. But I was there. I Had seen every bit of what I have come to see and I was soon to be huddled in a tent with my excellent room mate for a night on the glacier.

During the middle of the night I had to get up for a call of nature. I walked out into the cold air of 3 degrees Fahrenheit and looked all around at the wonderful mountains. Huge above us they shot into a night sky filled with stars. What wonder. But back to the tent quickly at that temperature! A few hours and our stay at Base Camp would end. As Sonya put on my logo: “I dreamt that I was standing at the foot of Mt. Everest…..and then I woke up and I was there! Cannot wait to share some pictures! 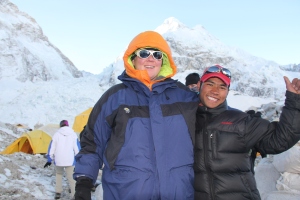 Mane and ME at EBC

Cover of The Climb: Tragic Ambitions on Everest

I have read both Jon Krakauer and Anatoli Boukreev‘s books explaining the events that occurred on Mount Everest in May of 1996. INTO THIN AIR is Krakauer’s and THE CLIMB is Boukreev’s.

I must admit, some of the differences in the information are disturbing. I have always enjoyed Krakauer’s writing but given the answers provided him about his criticisms of Boukreev, and that he and his publishers got them prior to publication makes me ask why he never changes his criticisms. One of the biggest Criticisms of Boukreev is that he did not dress well on summit day.  Photo evidence debunks this assertion outright yet Krakauer does not move from his statement. Pictures of Anatoli in the top state of the art climbing gear that existed in 1996 are easy to find.

I truly have read most that I can find written by Krakauer. And my decision to use Mountain Madness came after reading his treatment of the 1996 event and before reading Boukreev. But I feel dismayed that Jon seems not to have been able or willing to adjust to facts that were provided to him and his answers to why, with regard to some of them, left me outright appalled. What he thinks and what he feels are far less significant than what is trye when telling this story. There are times he claims he had heard conversations that he later, after being confronted with statements disputing his presence, says that he FEELS that what he heard was more accurate than what the first hand witnesses retell. For instance. He claims to have heard a conversation between Anatoli and Scott Fisher in which Anatoli was never told to descend immediately. Yet another climber present at the time claims the questioned conversation took place after Krakauer had begun a repel down, making it impossible for him to have heard what was or was not being discussed.

Whatever exactly happened on that mountain during that climb will never be completely clear. Anatoli is dead now. So is Lopsong Sherpa. Certain knowledge died with them. But the core of what is disturbing about INTO THIN AIR, is that Krakauer seems to have played fast and loose with the facts in order to hang the blame on one man….Anatoli Boukreev. And to what end? Both were on the same climb during the awful events that occurred.  In my opinion, as a guide, Boukreev had a responsibility to his clients on the mountain. By all accounts he felt that way too. Krakauer was not a guide and had no professional responsibility to assist when Boukreev asked for help going back up to search for missing climbers. I don’t judge any non-guide’s decision not to foray out into what probably was a death sentence for themselves to assist climbers, some of whom were not well prepared to even be on that mountain. But Boukreev pulled off what truly is amazing. he got Sandy Hill-Pittman, who by most accounts was not a prudent climber, having used up more than her share of oxygen while ascending/descending among other counter productive actions that chipped away at others’ ability to get down the mountain alive. He got two other women down that were struggling and assisted a male climber in getting back to camp IV. All after his own ascent and decent and taking him out into the same storm that would kill 8 people that night. All with nobody willing or able to assist him. He made every attempt…repeated attempts…to gather helpers to no avail. He gave up his own emergency O2 supply so others could use it.  In the end, Boukreev got all of the clients that Mountain Madness had taken fees from off that mountain. The only loss was company owner, Scott Fisher. The captain went down with the ship.

Rob Hall was a captain too. He was the captain of the ship Krakauer was riding. But the clients of that expedition did not do near as well. Rob was high up the mountain dying. The Sherpas and guides were either in camp or themselves lost and did not attempt to go back up to get anyone.  Several died. Beck Weathers was left for dead more than once, only to defy the grim reaper with his own gumption and get to where he could be taken off the mountain. Badly and permanently injured for the efforts.

So what is Krakauer’s real beef here? Why soil a man’s reputation that did so much that night. Agree or disagree with his methods, they seem to have been chosen for the purpose of the clients and not to be self-serving. But no matter the evidence presented to Krakauer to show that, he persists in his outright campaign to keep Boukreev the villan.

This has made me become a little skeptical of one of my all time favorite writers. His books read so well and are absolutely some of the best story telling I have ever encountered. He truly is an artist. But if he is compromising facts along the way for what motives can only be known by him, then I will find myself less willing to read his work. If the integrity of the writing is sacrificed, it becomes but an empty, hollow shell.

More Books about that same day in Everest history: